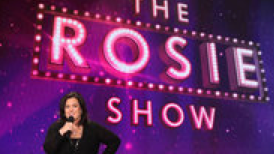 The final new episode, to be taped Tuesday on the eve of O’Donnell’s 50th birthday, is set to run March 30.

Winfrey, in a statement, called O’Donnell “an incredible partner” and thanked her for “joining me on this journey.”

Since OWN was launched last year by Winfrey and 50-50 partner Discovery Communications, it has struggled to match expectations buoyed largely by Winfrey’s phenomenal success as host of a long-running Chicago-based syndicated TV show.

“As I have learned in the last 15 months, a new network launch is always a challenge and ratings grow over time as you continue to gather an audience,” Winfrey said. “I’m grateful to Rosie and the dedicated ‘Rosie Show’ team for giving it their all.”

The hiring of O’Donnell, a comedian, actress and Emmy-winning host with her own successful daytime TV track record, to host a daily program produced in Winfrey’s old studio was seen as something of a coup for the network and for a local TV production community concerned about the void Winfrey was leaving behind.

But “The Rosie Show,” which made its debut in October, saw its average viewership slip from 500,000 at the start to about 150,000 in recent weeks. This did not help lure to Chicago top-line guests who once would have jumped at the chance to appear on Winfrey’s program. >The Rosie Show never proved popular enough to be the daily anchor for OWN it needed to be.

Speculation about the troubled show intensified in recent months after O’Donnell changed the show’s format. Then she moved to sell the multimillion-dollar Chicago home she bought just months earlier.

“I loved working with Oprah in the amazing city of Chicago,” said O’Donnell, a native New Yorker. “I was welcomed with open arms and will never forget the kindness of all I encountered. It was a great year for me — I wish the show was able to attract more viewers — but it did not. So I am headed back to my home in New York — with gratitude. On we go!”

It was not immediately clear what the cancellation would mean for O’Donnell’s Chicago production team members, many of whom hoped to be assigned to other Harpo OWN projects.

Donald Trump Mocks ‘Rosie Show’ Cancellation: She “Fails at Everything”