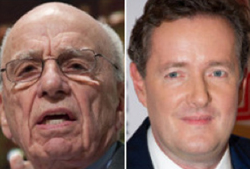 Piers Morgan told the New York Times that Rupert Murdoch turned him down flat when he asked the media mogul to come on his new CNN show, “Piers Morgan Tonight.”

Morgan first made his name working at Murdoch’s biggest tabloids in Britain, The Sun and The News Of The World, but he jumped to Murdoch’s mega-rival, The Daily Mirror, in 1995.

He asked Murdoch to appear on the show. Murdoch’s reponse? “Your chances are less than zero.” The Fox News owner added that “I wish you good luck, but I do not wish you success.”

The Times’ Brian Stelter also experienced Morgan’s flair for self-promotion when he received a private Twitter message from the host about his upcoming interview with Oprah.

“Now that Oprah’s called me ‘My toughest interview for 20 years,’ shouldn’t you be interviewing me for NYT to talk about it,” the message read.