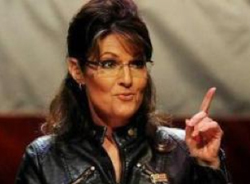 Sarah Palin has taken to Facebook to complain that NBC News broke a promise to her and to lash out against the network as part of the “lamestream” media.

In lieu of interviews, Palin and husband Todd gave NBC written statements that she says the “Today” show promised to run during its interview with author Joe McGinnis, the writer who moved in next door to the Palins in Wasilla, Alaska as he writes his book on the former Governor.

In the interview, McGinnis compared Palin to Nazi troopers.

But the network never ran the statements (they appear below).

“NBC broke their promise and didn’t run our statements after all,” Palin wrote on Facebook. “So, the ‘journalist’s’ sensational claims about us being Nazis went unchallenged. We emailed NBC this morning to ask why our statement wasn’t aired. We were given a lame excuse and told that they would run it tomorrow (after the damage had been done) and that they would be happy to interview me about it (which was their aim all along because journalism today is all about ratings and not about truth).”

Palin said that “it’s a shame that Todd and I had another disappointing encounter with the media on Memorial Day of all days,” saying that the holiday “was time that we could have spent with our kids and on a day when we honor those who have died in defense of our Constitution, including our freedom of the press. ”

“Reporters must be held accountable because with power comes responsibility,” she added. “A corrupt, deceptive, and manipulative media can ruin the lives of good people, disrupt families, destroy reputations, and ultimately hurt our country.”

Both Sarah and Todd Palin’s full statements appear below:

“McGinniss has followed us for some time now, from showing up on our doorstep last winter, bidding over $60,000 for a military charity auction dinner with me, writing the hit pieces, attending at least one Outside book event, etc. He has a right to pursue his subject, I suppose, and certainly has a right to live wherever he wants, but my family also has a right to expect privacy, and hopefully to enjoy peace this summer. Good fences do make for good neighbors. The fence is now up, and I hope that we can enjoy peace. The media sensationalizes the recent McGinniss’ tactic so the public will tune in to whatever the latest episode is, always with ratings in mind, and that’s unfortunate.” – Sarah Palin

“What’s also unfortunate is journalists’ tactics like this, because it keeps good people from wanting to get involved in public service.” – Todd Palin