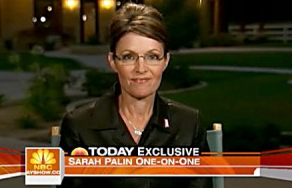 In a move that’s sure to delight some people, shock others, and confuse the rest, NBC has booked none other than Sarah Palin to guest-host Tuesday’s edition of the TODAY Show. The network’s decision comes on the heels of ABC’s announcement that Katie Couric will be guest-hosting Good Morning America this week, whom Palin has an infamous media connection to.

Palin worked as a sports anchor in Alaska, and following her 2008 run alongside John McCain, she signed on as a contributor for Fox News. NBC’s Lester Holt made the announcement about Palin’s appearance on the show last Friday, but only confirmed this weekend that she would be guest-hosting. The choice has not gone unnoticed by fellow MSNBC employees.

The Palin pick was part of the discussion on MSNBC’s “Melissa Harris-Perry“ this morning, with Harris-Perry asking her panel of guests if the rumor (which by then was fact) was, “Real or fake?”

“I hope its fake,” said one, while another chimed in about what we all know: “NBC is doing that as counterprogramming to Katie Couric guest hosting “Good Morning America.”

Palin, of course, was interviewed during her 2008 campaign by Couric in an interview that turned out to be one of the vice presidential candidate’s weaker moments in the race.