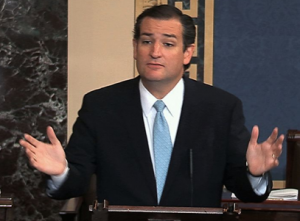 Sen. Ted Cruz (R-Texas), the political face of the recent government shutdown, will make his first late night TV appearance on Nov. 8 when he guests on “The Tonight Show with Jay Leno.”

Cruz’s appearance reflects the increasingly common trend of political figures, no matter how controversial, venturing into late night, often in hopes of softening their image or reaching audiences normally not tuned in to politics. Cruz is mentioned as a possible candidate in 2016, and his appearance would be in line with other past candidates who have appeared in late night in advance of a run. In 2010, Mitt Romney appeared on “Late Show with David Letterman” as he promoted his pre-campaign tome, “No Apology.”

In a press release, NBC said that Cruz will discuss the government shutdown, the debt ceiling, Washington gridlock and the state of the Republican party.