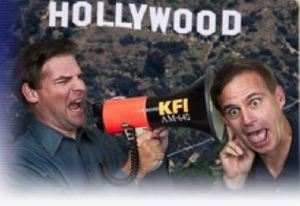 MInority and immigrant rights groups have been pushing for John Kobylt and Ken Chiampou, hosts of The John and Ken Show on the Clear Channel radio station KFI in California, to be taken off the air ever since the hosts targeted an immigrant advocate in a Sept. 1 show. On air, the hosts gave out the personal cell phone number of Jorge-Mario Cabrera of the Coalition for Humane Immigrant Rights of Los Angeles (CHIRLA).

Cabrera received hundreds of hateful and threatening phone calls afterward. “These calls were intent to diminish me as a person,” Cabrera told the Los Angeles Times

To pressure the sponsors, the NHMC has been asking people to contact the show’s major sponsors, such as Chevron, Hyundai, and Target, to ask them to stop sponsoring The John and Ken Show, and they are asking people to stop shopping at the advertisers if they don’t pull their ads. “As a consumer, let the advertisers know you are not willing to spend your hard earned money with businesses that support hate speech,” according to the NHMC’s campaign.