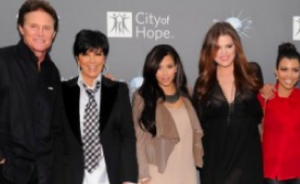 NBC announced Wednesday that the recently wed reality TV personality and her clan will co-host the fourth hour of “Today” next week, with each member of the family co-hosting with Hoda Kotb on a different day.

Kourtney Kardashian steps into Kathie Lee Gifford’s shoes Thursday. The recently wed Kim Kardashian will close out the week on Friday, offering a sneak preview of the special “Kim’s Fairytale Wedding: A Kardashian Event,” which is scheduled to air on E! on Oct. 10.

In a further bit of cross-promotion, behind-the-scenes footage from the Kardashians’ co-hosting stints will air nightly on “E! News.” (E!, like “Today,” now resides under the NBCUniversal umbrella.)

Jenner also co-hosts on CBS’ “The Talk” for two weeks this season, and is being eyed as a possible fill-in for Sharon Osbourne, who’s gearing down her duties on the show to spend more time with her family this season.

Oprah and Rosie Plug “The Rosie Show” and “Lifeclass”