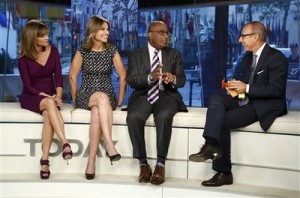 On Thursday, the “Today” show marks 19 years in their “Window on the World,” Studio 1A. The street-side studio, which debuted June 20, 1994, has been a gathering spot for tourists and locals alike, as celebrities and chefs, musicians and athletes discuss their newest project or sing from their latest album. But this Summer, the studio is getting its first makeover in 7 years and as part of the process the show is “rethinking the plaza experience,” reports the New York Times’ Brian Stelter.

That doesn’t mean the plaza will be used less. In fact, the show has now put an NBC News Page on the plaza acting as a sort of MC for the crowd.

The studio makeover is a continuation of changes at “Today,” which had its 16-year winning streak broken in April 2012 by ABC’s “Good Morning America.” In the tumultuous year since, anchor Ann Curry left the show, EP Jim Bell moved to NBC Sports. And now longtime director Joe Michaels is also moving on from his position. Michaels has been named senior director and one of his first tasks is implementing the new studio. Just last week, Matt Lauer presented Michaels with a distinguished alumni award from Seton Hall University.