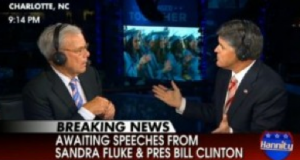 Tom Brokaw crossed the media aisle tonight and appeared on Sean Hannity‘s show on Fox News. The two discussed politics and the media. Hannity asked Brokaw if he believes journalism has changed for better or worse with the increase of more media outlets.

“I actually think it’s for the better,” Brokaw said. “You can no longer be a couch potato. If you want to be a good news consumer, you’ve got to get aggressive … and find what works for you.”

Brokaw was also on ABC tonight, sort of. As Diane Sawyer and George Stephanopoulos anchored coverage, a video in the big screen behind them flashed images from the 1992 campaign, and included shots of Brokaw and Dan Rather.

‘The Talk’ Hosts to go Without Make Up on Season Premiere