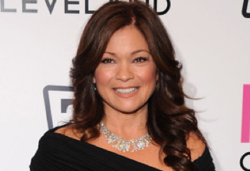 The show, which paired the peppy “Hot in Cleveland” star with Aussie talk-show host Rove McManus, failed to wow the bosses.

Its demise marks one less contender to lay claim to Oprah Winfrey’s daytime crown when “Oprah” ends its 25-year run in September 2011.

And the list is getting shorter. “The View” isn’t moving from 11 a.m. “Ellen” will stay on NBC stations for the long term. “Dr. Oz” is a legitimate threat, but still has to prove it has the chops.

One promising newcomer could be another CBS talk show pilot, developed by former “Roseanne” star Sara Gilbert and co-hosted by “Early Show” anchor Julie Chen and other A-listers.

That show (no title yet) has been described as “The View” for the mommy set — since Gilbert, Chen and co-hosts Sharon Osbourne, Leah Remini and Holly Robinson Peete are married with kids.

Shot a few weeks ago in LA, the show would be “a topical roundtable show . . . all the women happen to be mothers, so it’ll go through that filter,” says one source.

It’s a candidate to replace veteran soap “As The World Turns,” which ends its 54-year run on CBS in September. And, if it hits the ground running, the possibilities are endless.

The race is on, but already some have faltered at the starting gate — while others await their chance to get on air to show they’ve got the “right stuff” to rocket into daytime stardom.

But it won’t be easy. “Oprah” will leave behind a huge void to fill, and even coming close to snaring her type of audience — both in viewers and demographics — will be a mighty challenge.

So, who’s up to the task? Only time will tell, but here’s our take on the left-behinds and the wannabes:

“Ellen”: Has a deal to remain on NBC-owned stations through the 2014 season. OK numbers, but nowhere near an “Oprah”-type audience, even with host Ellen DeGeneres’ boost from judging “American Idol.”

“The View”: Bid to move the show into daytime syndication was snuffed out by ABC, which co-owns the show. It will remain in its 11 a.m. timeslot. Barbara Walters grits her teeth over lost millions in syndication revenue.

Paula Deen/Kate Gosselin/Rene Syler/Lee Woodruff project: TelePictures shot a pilot, but that was about it. Went nowhere.

STILL IN THE RUNNING

“Swift Justice with Nancy Grace”: Another CBS-produced show premieres this fall and will be tied to station commitments for several years — but Grace could be a breakout daytime star in a format that suits her aggressive style. Why not?

“Dr. Oz”: Sony talk show starring telegenic Dr. Mehmet Oz (right) was a freshman hit, but the jury’s still out on whether it can sustain its momentum. Stands to inherit many of “Oprah’s” prime slots after September 2011—but not here in New York, TV’s biggest market.