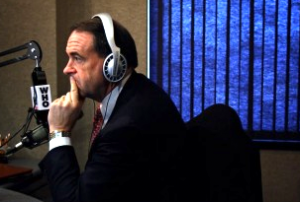 Mike Huckabee is expanding his media reach to a radio program scheduled to start airing in April. However, the show is scheduled to be in direct competition with none other than Rush Limbaugh. In a column for The Daily Beast today, David Frum thinks Huckabee’s new show might end up hurting Limbaugh’s numbers, and gave some insight into the reasons surrounding decisions by advertisers to leave Limbaugh’s program.

Last month, Huckabee announced he would be doing the radio show for Cumulus Media Networks, while continuing to work the weekend shift on his Fox News show, Huckabee. His show has been distinguished as not a “conservative talk show, ” but “a talk show by a conservative.” When asked about the fact that his show will be broadcast opposite Limbaugh’s, Huckabee said he doesn’t see Rush as a competitor, and acknowledged that Limbaugh has a very loyal audience that has stuck with him for years.

That was last month. In the aftermath of Limbaugh’s huge controversy and advertisers leaving his program in droves, some are wondering if this will end up benefitting Huckabee’s show and giving him an advantage. Media Matters suggested that Huckabee would offer a “safe harbor” to advertisers who have no problem with buying at space on conservative talk radio, just not where Limbaugh is concerned. Frum took it one step further today by laying out exactly why Huckabee will end up being a more serious challenge to Limbaugh’s radio dominance than previously imagined.

Frum explains that unlike most other radio hosts, Limbaugh charges radio stations for his content and charges incredibly high advertising rates. However, these deals are reliant on Limbaugh delivering strong numbers, and Frum says he has been “notably failing” in that respect. One metric advertisers really care about is TSL (time spent listening). Here’s how Frum breaks it down:

Here’s how this operates in the real world. Limbaugh knows that his share of big markets like Dallas or Atlanta has dropped from his old 5 percent in any given hour to, say, 3 percent. But if he can entice that 3 percent to listen twice as long, he can more than make up the loss.

That imperative explains why Limbaugh kept talking about Sandra Fluke for so long. He was boosting his TSL to compensate for his dwindling market share. Few things boost TSL like getting the old folks agitated over how much sexy sex these shameless young hussies are having nowadays.

So why are Limbaugh’s advertisers fleeing? Because according to Frum, advertisers are starting to “revolt… against the TSL strategy” and ask “that their purchased minutes be placed on some less-controversial program. And that’s exactly what Huckabee is offering. A show that’s “more conversation; less confrontation.” But any shifts won’t come quietly. As one radio veteran told Frum, “if just one station in a top-20 market replaces Limbaugh with Huckabee, it’ll be an earthquake.”